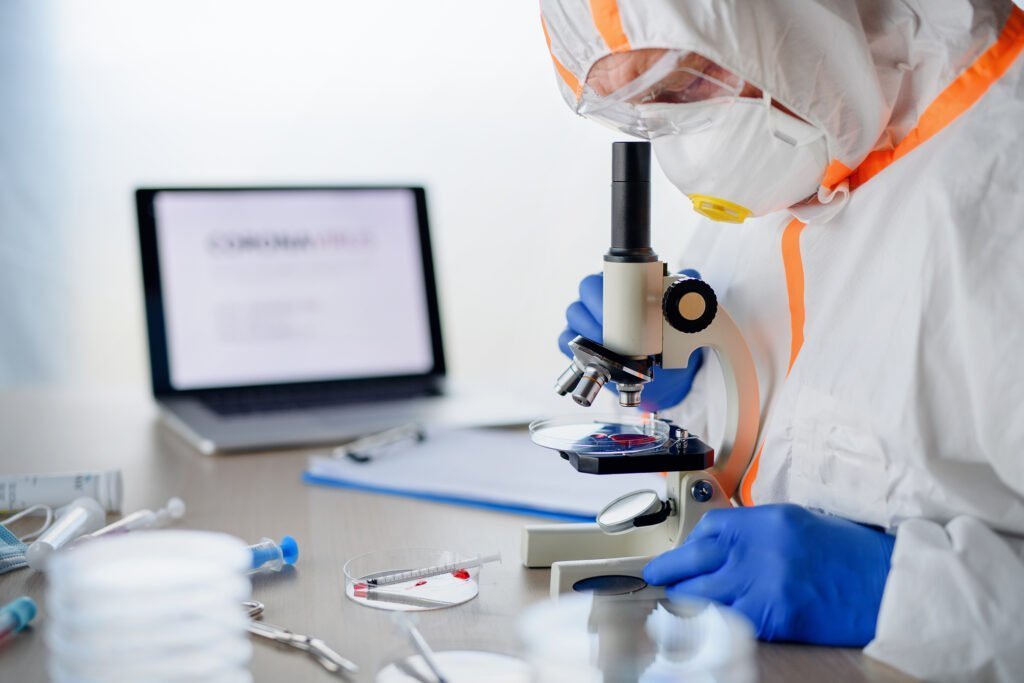 Prenatal diagnosis (PND) includes various techniques and methods. Obtaining samples for genetic testing is one of the critical steps in prenatal diagnosis and should be done by a highly qualified ob/gyn specialist. Possible sampling procedures include chorionic villus biopsy, amniocentesis, cordocentesis, and non-invasive prenatal testing (NIPT).

Prenatal testing allows us to:

Indications for invasive prenatal diagnosis include:

Chorionic villus sampling (CVS), or chorionic villus biopsy, is usually done between the 11th and the 14th week of pregnancy. Under ultrasound guidance, transcervically or transabdominally, 5-10 mg villi are aspirated from the outer trophoblast layer so that the amniotic sac is left intact. Disadvantages of this method are the higher risks of abortion (0.5%–1%) and limb abnormalities when performed before nine weeks of gestation.

Nadezhda’s Genetics lab is equipped to do array comparative genomic hybridisation (array CGH), chromosomal/whole genome sequencing (ChromoSeq) and next-generation sequencing (NGS) testing, which can diagnose over 99% of chromosomal diseases. The advantage of these assays is that they provide information about all 23 chromosome pairs of the foetus, in contrast to conventional QF-PCR DNA analysis, which routinely tests only the 13th, 18th, 21st, X- and Y-chromosomes.

Cordocentesis or percutaneous umbilical blood sampling is done between the 20th and the 24th week of pregnancy, during which a fetal blood sample is aspirated from the umbilical cord under ultrasound guidance. It is usually applied in cases of Rh-isoimmunisation, for detection of other foetal anaemias, blood transfusion, for foetal renal function (FRF) assessment, for quick foetal karyotyping to clarify suspected mosaicism, or for array-CHG or next-generation sequencing (NGS) assays for numerical and structural chromosomal abnormalities to diagnose over 99% of chromosomal diseases.

Non-invasive prenatal testing (NIPT), also known as Non-invasive prenatal screening (NIPS), is an analysis of foetal cell-free DNA (cfDNA) present in the mother’s blood to determine the risk of foetal aneuploidy. The most widely used testing method is next-generation sequencing, and more rarely, other techniques like qPCR or comparative genome hybridisation are applied.

During pregnancy, in the maternal blood flow is found a cell-free DNA (cfDNA) mix originating from maternal and placental cells. It is called cell-free DNA because it is not contained in the cells as usual but is circulating freely in the mother’s blood. Between 2% and 40% (typically around 10%) of these tiny DNA fragments are, in fact, foetal genetic material. They come from dead cells in the placenta, from where they are continuously released into the pregnant woman’s blood flow. cffDNA can be found in maternal plasma as early as 5-7 weeks of gestation, but results from its analysis are more precise after the 10th week of pregnancy, as its quantity tends to rise with time.

Since NIPT is a screening method, positive results are not a definitive diagnosis and are subject to confirmation by invasive testing, especially if pregnancy termination is discussed.

NIPT assays have been developed for other genetic diseases, such as microdeletions/microduplications syndromes, monogenic disorders, for aneuploidy screening of all 24 chromosome pairs, and Rh-D testing of the foetus, as well as paternity testing. Their validation is subject to additional studies, and due to the limited evidence for their precision at the moment, they are not recommended as an alternative to invasive prenatal genetic diagnosis.

Indications for NIPT are similar to those for invasive prenatal genetic diagnosis:

Genetic analysis of products of conception (POC) after medical abortion or miscarriage can reveal the underlying cause of pregnancy loss and is a valuable tool in the management of recurrent miscarriage cases.

About 15–20% of all pregnancies are usually lost. In pregnant women over 40, the miscarriage rate is as high as 50%. Numerous studies have identified various possible causes – genetic, age-related, antiphospholipid syndrome, uterine abnormalities, hormonal or metabolic diseases, autoimmune diseases, sperm quality, environmental factors etc. Depending on the time of pregnancy losses, they can be classified as early (before 12 weeks of gestation) and late (12–20 weeks).

At Nadezhda hospital, products of conception are analysed by array comparative genomic hybridisation (array CGH) and next-generation sequencing (NGS) for detecting numerical and structural chromosome abnormalities. The advantage of these techniques is that they provide information for all 23 chromosome pairs in the POC karyotype, as opposed to conventional QF-PCR DNA analysis, which routinely tests only the 13th, 18th, 21st, X- and Y-chromosomes.

Other diagnostic and screening tests